SSL 2 and SSL 2+ are more than just an audio interface, they are the centre of your new Solid State Logic studio. Class-leading mic preamps, Legacy 4K analogue enhancement, studio-quality monitoring and the incredible SSL Production Pack software bundle. SSL have been designing cutting-edge mixing consoles and processing tools for the world’s finest recording studios for over four decades. Now you get all that hit-making know-how in your own personal studio.

New colours from the masters of analogue.

Fusion is an all-analogue 2U stereo outboard processor created for the modern hybrid studio. Fusion introduces five completely new analogue colouration tools designed to bring the perfect combination of added tonal character, weight and space to your mix bus or stereo stems, with the detail, warmth and finesse that only real analogue circuits can provide.

The SSL sonic legacy is built upon a much-emulated collection of analogue audio processing tools that have featured in generations of studio consoles; pristine mic pre’s, classic Channel EQ & Dynamics, the legendary Stereo Bus Compressor, the Listen Mic Compressor, and the unique SSL summing bus. Fusion takes SSL into a new era with the introduction of a suite of new analogue processing tools that offer exceptional tonal character and versatility. Fusion expands the processing palette for hybrid studio owners and is a superb partner for the SSL Stereo Bus Compressor.

Designed for the DAW user that seeks the legendary big sound of an SSL console while retaining the convenience of working in the box, Sigma δelta is a unique rack mounting SuperAnalogueTM mixer with full synchronised control via the Sigma Remote Control Application and Delta-Control DAW plug-ins.

The SSL big console sound has been available in 12 different modules for our own modular X-Rack system for many years. The system enjoys a large and enthusiastic customer base with more than 15,000 modules sold. X-Rack users reap the benefits of the very high-quality power supply and on board TotalRecallTM offered by the X-Rack system. The release of modules for the widely-used 500 format modular rack platform makes a small slice of the SSL sound available to a wider group of users.

SSL’s range of modules for the 500 series rack format currently consists of five different modules; the classic Stereo Bus Compressor which has featured on every model of SSL large format analogue console, E-Series EQ and E-Series Dynamics modules which deliver the legendary sound of the channel strip processing from SSL’s 1980’s E-Series console, and the incredibly versatile VHD Pre input module which can deliver ultra-clean recordings or a range of more saturated tonal characteristics and the LMC+ module, a new twist on the legendary SSL Listen Mic Compressor. 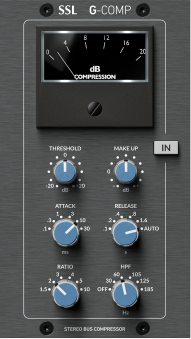 This is the 1U rack mounting version of the SSL G Series console master bus compressor. It utilises the classic SSL G Series centre compressor design elements within a SuperAnalogue design topology. This brings the dual benefits of spectacular audio performance with a universally acclaimed compressor characteristic.

The Alpha VHD-Pre offers four of SSL’s widely acclaimed VHD Pre circuits in compact 1U format. First featured on our flagship Duality console and now the go to circuit for leading engineers worldwide, the VHD Pre is a patented SSL preamp design that can deliver ultra-clean SSL grade recordings but also features a patented ‘Variable Harmonic Drive’ circuit which can be switched into the signal path. The Variable Harmonic Drive circuit uses a 100% analogue signal path to generate rich harmonic distortion. As you increase the input gain, the Variable Harmonic Drive circuit introduces either 2nd or 3rd harmonic distortion or a blend of the two to your source material. At lower gain settings it adds gentle valve-style warmth or a touch of transistor edge. As the gain is increased the more extreme the distortion becomes until at high gain settings it delivers fierce trashy transistoresque grunge. VHD pre’s give the user ultimate versatility from a studio grade preamp. Whether it’s ultra-clean traditional SSL, subtle warming or totally trashy transistor distortion. VHD delivers a uniquely versatile pallette of rich analogue character that can be applied as a mic pre, instrument DI or line level processing device.

Each Pre is a simple analogue device with XLR in/out on the back, an instrument level 1/4″ jack on the front panel. Each circuit has a Hi Z switch to accommodate mic, line and instrument level signals, a PAD switch to facilitate use as a line level processing device and 48v phantom power switch. There are three rotary controls: Input Level, VHD and Output Level.

All great sounding recordings have to start somewhere…

With the classic combination of mic preamp, filter, EQ, dynamics, and A/D conversion, the Alpha Channel draws upon SSL’s sonic legacy to provide an affordable analogue channel strip designed to provide the perfect front end to your DAW.

The Alpha Channel packs in a sophisticated and versatile collection of features for its size and price; a high-quality mic pre with switched impedance for instrument or line sources, phantom power and phase invert. A VHD circuit for added analogue tone, an Insert for streamlined additional processing, a three band EQ design utilising the classic SSL channel strip EQ sound and with selectable Bell curve for the LF, a High Pass Filter with 40/80/120Hz cutoff frequency selection, a switched lite limiter to prevent digital clipping, a high quality Analogue to Digital audio converter, and an S/PDIF digital output.

SSL Network I/O is a range of I/O devices which bring SSL’s renowned quality and innovation to Dante based IP Audio networks. IP Audio networking provides a hugely versatile solution for environments where audio assets are shared by multiple users across multiple recording areas and control rooms. Dante is a commercially developed IP Audio network protocol. It uses standard IT infrastructure (Ethernet cables, connections and network routers & switches) for audio transport, routing, device discovery and control. With more than 350 Dante enabled products by more than 150 different manufacturers already released, Dante is considered by many to already be the established industry choice for the use of IP networks for audio distribution. IP audio networking offers a fresh approach to audio routing and asset sharing for audio production with a wide range of benefits:

The SSL Network I/O range was developed initially for use in broadcast installations. There is a wealth of detailed information about IP Audio Networking and Dante in our extensive white Paper: IP Audio Networking. Professional AoIP for Broadcast – The Way Forward. If you are new to IP Audio and/or multi-space audio routing and distribution it is essential reading.

There are currently nine products available in the SSL Network I/O range:

A versatile combination of mic/line and digital I/O

AES to Dante and MADI conversion wherever you need it

The SSL Network I/O: MADI-Bridge is a broadcast specification bridge between the industry standard MADI audio format and IP audio network’s using Dante. The MADI-Bridge enables C100 and C10 Digital Broadcast Consoles or any other standard MADI device to connect to Dante based IP Audio networks with full redundancy maintained.

The SSL Dante PCIeR interface provides high capacity Dante connectivity to any suitably specified Mac or PC. It features Primary and Secondary network connections and streams up to 128 channels (at 44.1, 48 kHz, 88.2, 96 KHz) or 64 channels (at 176.4 or 192 kHz). Minimum latency and synchronisation is less than 1 μSec. The card is compatible with external PCIe chassis for laptops.

Designed for use on any Broadcast studio floor, venue or recording room, SSL Network I/O Stageboxes allow easy deployment of Mic Pres and Speaker feeds where needed. Network I/O’s plug and
play features allow devices to easily be moved, even between locations and retain routing and settings if required. All units can be remote controlled via System T broadcast consoles and control interfaces, SSL Live consoles, and the SSL Remote Stagebox Application. There are three different models available; SB8.8, SB i16 and SB32.24.

The SB 8.8 and SB i16 feature inbuilt limiters and SSL’s innovative AutoPad system that automatically applies a Pad according to gain setting. The AutoPad is applied if the gain is set at a low value that would
require a pad to achieve making the entire possible mic gain range seamlessly available at all times. An Audition feature allows individual channels to be monitored over the network (using an SSL console or App) without the signal actually being routed to a network destination.

SB 32.24 is a 5U ruggedised enclosure featuring dual redundant power supplies, 32 mic/line inputs, 16 analogue line outputs and 8 digital inputs and outputs on 4 AES3 input/output pairs. It has a pair of redundant RJ45 Dante network connections in addition to a user configurable SFP port that can be fitted with RJ45 or optical connectors. These can be used for network extension or to provide network separation for the gaincompensated Dante “split”, for connection to a second Dante-equipped console or appropriately equipped device on a different network. It has individual signal present, clip and phantom power LED’s as well as global indication of PSU, Network A and B and Hardware status.

The SSL Stagebox Remote Control application provides comprehensive remote control of SSL Network I/O Stageboxes via a Dante network. The software can be installed onto any PC located anywhere on the network and multiple instances of the software can coexist on the network, with all instances of the application having access to all SSL Stagebox units currently available on the network. The Remote Control Application offers complete control over the extensive feature set of SSL’s Stageboxes and acts as a communication aid with clear real time device and channel attention indication.