T-DMB originated from T-DAB. Video and enhanced data services were added to T-DAB that focused audio and simple data. Since then, the reinforced services have developed into multimedia broadcasting. T-DMB is terrestrial transmission path, to mobile, hand-held, or fixed receivers, T-DMB users can enjoy a variety of multimedia services that they have never experienced before. 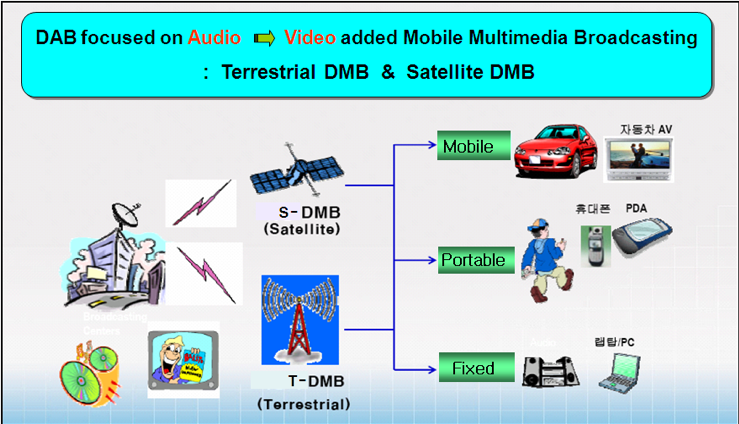 In 2009, about 50 manufacturers launched 700 types of T-DMB terminals and viewers are able to select a terminal they want, among the ones within a broad price range and with a variety functions.

Korean home appliances manufactures declared that they would mount T-DMB function on all the devices with a screen, and thereby the T-DMB became a basic commodity, as consumers now regard T- DMB function as a natural basic option in the process of purchasing diverse portable terminals like a PMP (personal media player), a cellular phone, a hand-held terminal, etc. 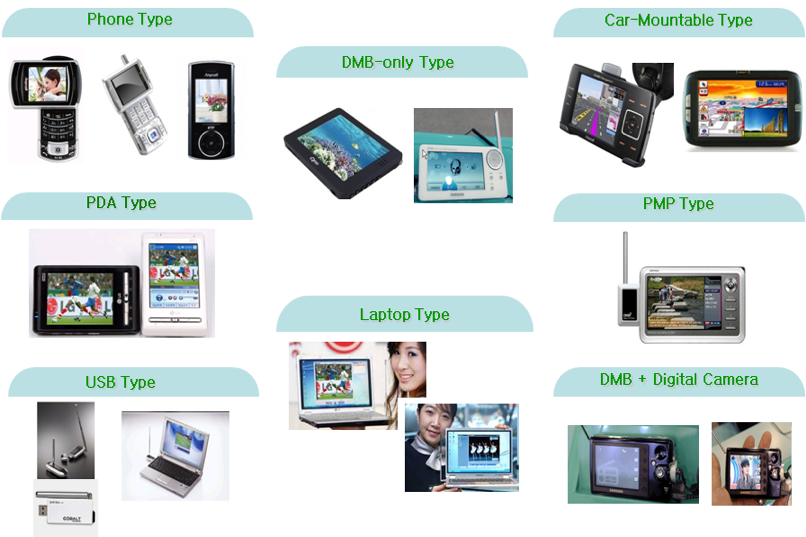 Average monthly sales showed 600,000, representing that 7,000,000 terminals are increasing every year. Given the fact that there are 25,000,000 TV sets in Korea, the cumulative sales number 42,000,000 is significant. Considering those who have a TV DMB receiver in plural number, it is estimated that all of Korean people, except for the elderly and children, have T-DMB terminals. Meanwhile, new terminal sales will last until the number reaches 50,000,000, and after that, the number of new terminals that will be replaced with the sold ones will be recorded as the cumulative sales number. The cellular phone replacement interval in Korea is within 2 years (youth: 1 year and 4 months), and that of the car navigation system 2 year and 6 months.

Since the new TV-DMB broadcasters have no transmission infrastructure, they are transmitting their signals renting those of the existing terrestrial TV service providers. Some T – DMB channels have been chartered to program provider, which are under service.

BIFS (Binary Format for Scene), called also “interactive data service,” is a service system based on MPEG-4 technologies. Using pictures, texts, videos, etc., this service enables users to transmit or select images and data at the same time, and it is a technology standard allowing users to have interactive conversation through interactive functions as required. In addition, since this service is provided through video or audio channels, not through separate channels, it provides additional and specific information linked to programs, as well as a variety of independent information.

Meanwhile, if this service is combined with a variety of return channels such as ‘3G’, ‘WiBro,’ etc., other than with T-DMB broadcasting networks, you will be able to enjoy services using the existing broadcasting networks as well as interactive services with more functions. For example, users are also able to select menus such as ‘TV On Demand Service,’ ‘Program Participation’, ‘shopping’, ‘Main Scenes Storage and Transmission.’

TTI (Traffic and Travel Information), a core of DMB services based on protocol of TPEG (Transport Protocol Experts Group), provides traffic and travelling information in real time, combined with convenient ‘Local-base Service’ and ‘Tele-metics.’ In addition to standards on RTM (Road Traffic Message), PTI (Public Transport Information), POI (Point of Interest) and news services are combined, and thus this service is in the limelight as a general information providing system based on location.

T-DMB services provide several functions to prevent disasters by transmitting in real time the integrated information for public safety on natural disasters and emergency situations, including typhoons, earthquakes, tsunami, or emergencies, Through EWS

Beyond a disaster broadcasting system of the existing media that is specially produced and programmed, or a traditional one that focuses on delivering emergent situations using subtitles, it directly provides terminals with the emergency information using EWS function, which have been obtained from a national disaster warning systems installed in national institutions such as National Emergency Management Agency, National Weather Service, National Police Agency, etc.

The T-DMB terminals which have received these information come to get disastrous information by forcibly changing into a main disaster – dealing channel while users are watching another channels with pop-up of alerting messages, or even functions as an “Automatic Terminal ON” system depending on several options.

This service provides a variety of information using the same technologies as a video channel through slide show functions while users are listening to music on audio channels. It offers more advanced services at 2~5 seconds of interval by displaying program information, all sorts of music – related information, such as, singers/lyrics/performances, etc., text message participation, weather, and traffic.

BWS (Broadcasting Web-site Service) is a service system providing the information with high – level publicity in a web page form through DATA channels, and it also offers news and information on traffic, weather, economy and finance.

Since this service transmits information using T-DMB broadcasting networks, it doesn’t have an interactive function needed for search and information transmission. But broadcasting stations transmit information within a range of 3 – step in depth, so viewers have no difficulty in receiving basic information.

To remedy the shortcomings found from this BWS service, DMB 2.0 has been developed. This service is mainly characterized by 2 things: interactivity and simultaneity. To implement ‘Interactivity,’ this service uses a down-link channel as its broadcasting network and an up-link as its mobile broadcasting network. On the contrary, ‘simultaneity’ means that users use DATA services dividing TV screen vertically or horizontally during audio or video services. These two features resulted from a close structure between telecommunication operators and terminal manufacturers, increasing in terminal screen size, and a variety of base technologies.

While users watching the video, the additional DAT services are displayed in the lower area, and thus they can use the BWS information provided as part of basic service. Through this service, users can use more specific information.

To enjoy this service in a vertical or horizontal form using the “AUTI-GYRO” function, users have to pay additional charge for using a communication network.

T-DMB is a broadcasting technology allowing users to receive the service signals in SD- level video quality and CD-level sound quality even using terminals moving at 200 km/h by car and 300km/h by express train. This technology uses VHF frequency and L-Band and the bandwidth of T-DMB is 1.536 MHz In other words, this service adopts MPEG-2 TS to transmit signals stably and uses multimedia compression technologies for the upper layer, I.e., MPEG-4 part 10(H.264) – video channel encoding and MPEG-4 ER BSAC – audio encoding in video channel and MPEG-1/2 Layer2 (MUSICAM) – audio channel encoding. As a standard of data – added services, MPEG-4 BIFS is used, through which interactive broadcasting services are available. As a transmission method, OFDM is used and a DQPSK modulation method is also used added to OFDM. With the use of this modulation system, it is possible to provide stable video services and to receive video signals for clear pictures even during high speed running.

T-DMB technologies are the one internationally authorized, as they have been adopted as a 1)standard of ITU-R, ETSI, and TTA.